“The bells. I love the bells.” -Mother (Beethoven Lives Upstairs)

On Saturday, my brother-in-law and I went to Mission San Juan Capistrano to learn about some of California’s history. Armed with a camera, a desire to learn, and stomachs full of Mexican food, we knew we were in for a good time.

At the entrance we paid our fee ($9 for me; he got a military discount of some undisclosed amount) and were given headsets and a stack of paper, including a map and other information about the mission. In an attempt at efficiency, my bro-in-law and I decided to follow the audio tour outlined on our map. After listening to the first recording, we abandoned the endeavor and decided to wander around aimlessly (a much more enjoyable option).

From the main courtyard, I snapped a few photos and we made our way to the old chapel. The chapel, designed with a floor plan in the shape of a cross, is in ruins because an earthquake many many years ago demolished most of it. (Fortunately, a near replica was built just a few hundred feet away called “Mission Basilica,” which is an operating Catholic Church. We were able to walk through it before 4PM mass toward the end of our stay in SJC.) 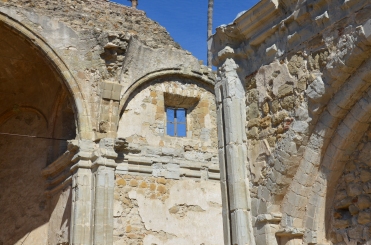 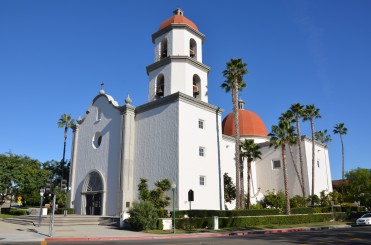 After touring the old chapel, we continued in a counter-clockwise direction around the mission, passing through the burial grounds (where over 2,000 Native Americans were laid to rest) on our way to see the bells (pictured above). Mission bells were an integral part of mission life because the priests would ring them to announce meals, meeting, breaks, weddings, and many other important events.

From the bell wall, we wandered inside to read about Father Serra (the Priest who oversaw 9 Southern Californian Missions, including this one) and watch (most of) an introductory video. After the video, we walked through Serra’s chapel and out to the central courtyard. 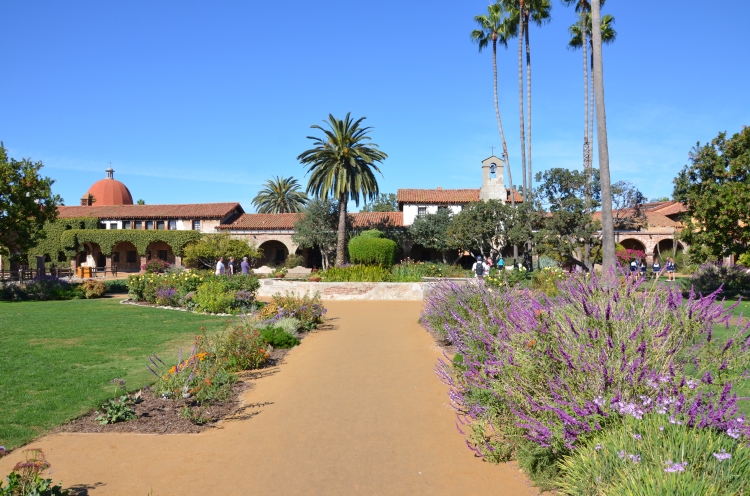 It happened to be a beautiful day so there were groups of cheerleaders and a wedding party taking photos in this area. (See cheerleaders in the middle right of my photo. Wedding party, not shown.)

Continuing around the koi pond, we went to the back of the Mission where we found the garden. The garden is an interesting place because they still grow some crops there, including squash and grapes. (Priests in California at the time of the Missions needed wine for Mass so, instead of waiting for ships from Spain to bring it, they imported vine clippings and grew their own grapes!) This section of the mission also featured large ovens and vats that were used to make products (like soap and candles) from tallow. 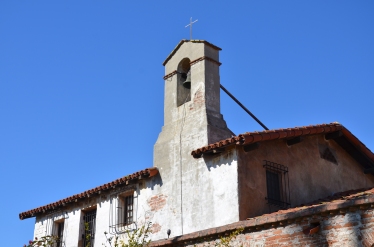 Mission San Juan Capistrano was overseen by Catholic priests, like Serra, but these priests employed local Native Americans (Acjachemen in this particular area) to tend the grounds, reap the harvest, and keep the mission running from day-to-day. (The priests used this as an opportunity to bring the Native Americans in, given them work, and teach them about the faith.) There seemed to be a high level of cooperation between the Acjachemen and the priests throughout the time the mission was in operation.

After seeing the garden area, we made our way through a few final exhibits, looked at a couple replicas, returned our headsets, and made our exit (through the gift shop, of course).

If you are looking for a historic day trip, we’d recommend taking a friend and checking out the old mission in San Juan Capistrano. (There also happens to be a Mexican Restaurant down the street, El Maguey, that serves a delicious wet carne al pastor burrito. It’ll run you $10-20/person.) 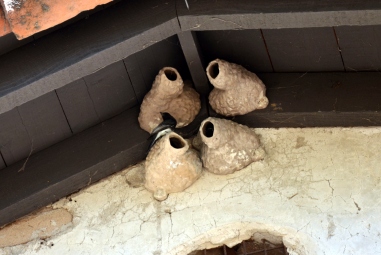 End note: the mission is also known for the swallows who make an annual migration there. We were able to spot a few towards the end of our tour.

It turns out that a song was written in the 50’s celebrating the return of the Swallows to San Juan Capistrano. Listen here!

Have you been to this Mission? What did you think of it? Share your thoughts in the comments!